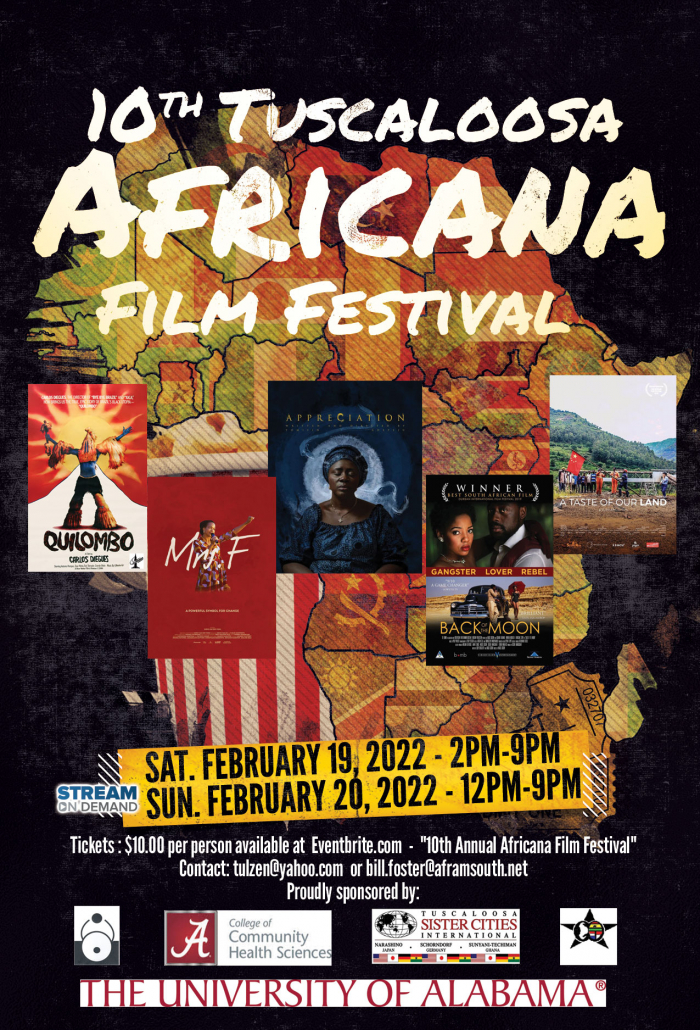 Tuscaloosa will host its 10th Annual Tuscaloosa Africana Film Festival, in a virtual format considering the global pandemic. Acclaimed movies from the African continent and the broader African Diaspora will be screened. As we did last year, we will present a selection of acclaimed Africana movies virtually. Six movies will be screened this year and participants can join from the comfort of their device of choice by logging on anytime during the 30-hour period from 2pm on 02/19 to 10pm on 02/20.

The program details for this 10th edition of TAFF are as follows:

Quilombo is a classic Africana movie from 1984.It is a Brazilian drama film directed by Carlos Dieques. It was entered into the 1984 Cannes Film Festival. The film is based on the history of the Quilombo dos Palmares. It is a drama about Africans enslaved in Brazil who revolt in 1650 and escape from their sugar plantation to the depths of the jungle, where they join other runaways. Under the leadership of Ganga Bumba (Tony Tornado), the men are able to carve out a place to live, repelling attempts by their Portuguese masters to recapture them. The community is further strengthened by the return of Zumbi (Antônio Pompêo), kidnapped from them as a child, who comes back to command their military.

The life of Mamie Lang Kirkland, a 111-year-old African American woman who experienced and survived racial terrorism, segregation, bigotry and bias and continued to have hope, joy and love of life, full of the certainty that people can do better. Mamie vowed to never return to Mississippi – until now. After 100 years Mamie’s youngest child, filmmaker, Tarabu Betserai Kirkland, takes his mother back to Ellisville to tell her story, honor those who succumbed to the terror of racial violence, and give testimony to the courage and hope epitomized by many of her generation.

In Makoko, the largest slum on water in Nigeria, Mrs. F. sets out to unite women by staging a play called Hear Word, an empowerment project based on true stories. Through highlighting gender inequality, her hope is to get women out of their position as the oppressed, convince them to speak up, and encourage them to connect. But before she can chip away at these layers of oppression, she must overcome the unruly gatekeepers of patriarchy and religion.

When an African pastor in London undergoes a life-changing event, she questions everything she believes in.

A powerful gang leader in a Johannesburg ghetto decides that he will fight to the death for his home rather than face police relocation, but fate thrusts a beautiful singer, whom he has loved from a distance, into his orbit.

A Taste of our Land

This is a debut feature from Rwandan director Yuhi Amuli, is set in an unnamed African country against the backdrop of rising Chinese influence on the continent. It was the winner Best feature 2020 Africa Movie Academy Awards and Winner Best First Feature Narrative, 2020 PanAfrican Film Festival.

The Tuscaloosa Africana Film Festival is presented by the Edward A. Ulzen Memorial Foundation (EAUMF) and Afram South Inc., two non-profit organizations supporting education and public health initiatives in Ghana, West Africa and West Alabama respectively. It is also co-sponsored by The College of Community Health Sciences (CCHS) at UA, and the Tuscaloosa Sister Cities Commission. Tuscaloosa is a sister city of Sunyani –Techiman in Ghana.

Tickets are available online at https://www.eventbrite.com/e/2022-tuscaloosa-africana-film-festival-tickets-257116661857

The Aframsouth Journal – Volume 1 No. 01
Scroll to top