Tuscaloosa will host its 7th Annual Tuscaloosa Africana Film Festival to include films from the broader African Diaspora as well as the continent itself. Screenings of this year’s selection will occur in a community setting at Central High School who are co-sponsoring the event on Saturday, February 16th 2019.

The Children’s feature movie for this year, written and directed by Dara Harper, is “The Sky Princess” a CG-animated feature film about an ordinary girl who becomes an African princess with the help of a magical bird. But when the thrill of palace life fades, the same magic that transformed her into royalty prevents her from returning home.

Regular programming for the film festival will run from 5:00 to 11:30 pm with five movies, including two acclaimed features, “The man who mends women” and Oscar nominated “Hale County” an Alabama based documentary. 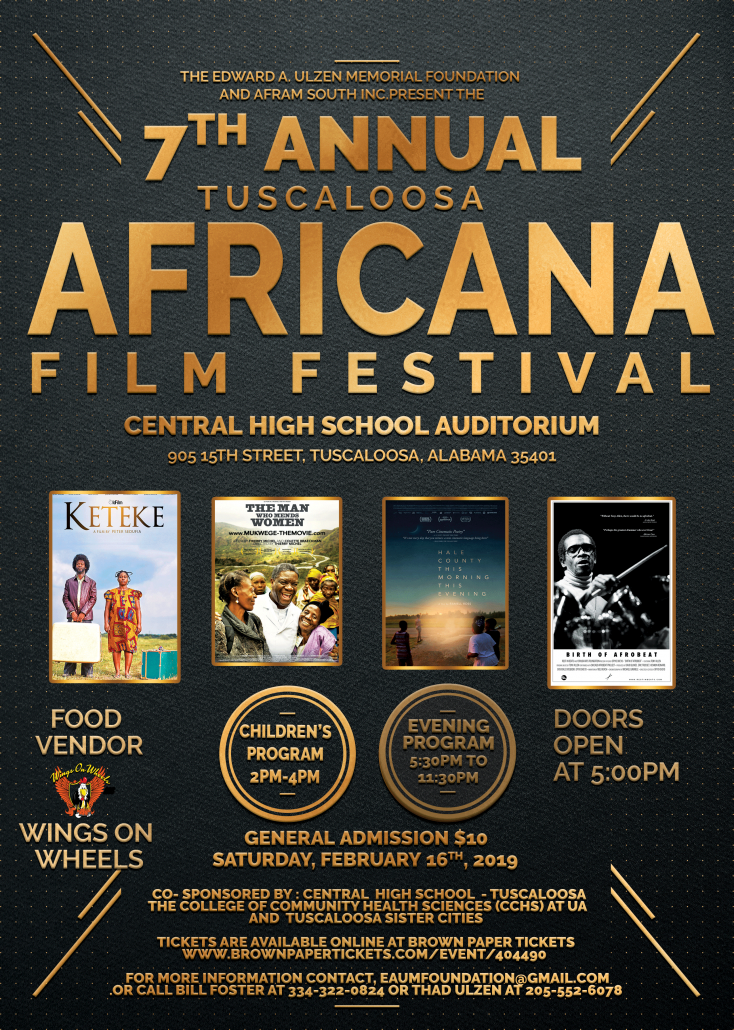 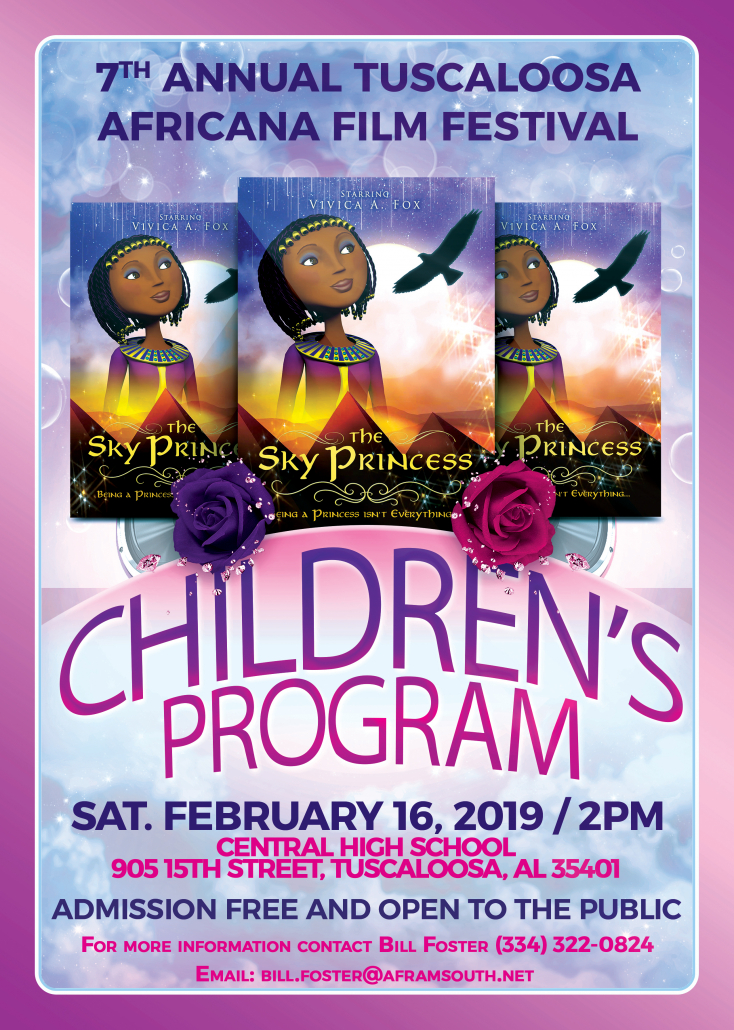 “The man who mends women – The wrath of Hippocrates” (113 min) a film by Thierry Michel and Pascal Colson, is about the work of Dr. Dennis Mukwege, Nobel Peace Prize winner 2018. It details his work in restoring to health, thousands of women who have been victims of brutal sexual violence from soldiers in eastern Democratic Republic of the Congo.

The second feature, “Hale County, this morning, this evening” (76 min) a documentary set in Alabama’s Black Belt, is composed of intimate and unencumbered moments of people in a community, this film is constructed in a form that allows the viewer an emotive impression of the Historic South – trumpeting the beauty of life and consequences of the social construction of race, while simultaneously a testament to dreaming. This 2018 movie is directed by RaMell Ross and co-written by Maya Krinsky.

The first short is “The birth of Afro Beat” (7 min). In September of 2017, 77-year-old Nigerian drummer Tony Allen was invited to record the album What Goes Up with American band, Chicago Afrobeat Project. During their time together, Allen recounts how he and his partner, late music legend, Fela Kuti, created the Afrobeat genre in Lagos, Nigeria. In this hybrid live-action/animated film, director Opiyo Okeyo presents a snapshot of Tony Allen’s story.

Opiyo Okeyo is a filmmaker from Pasadena, California with a digital marketing background. Opiyo graduated from Howard University and began his career as an editor at Discovery Channel. His work has appeared on VH1, History Channel, MTV, People.com, and National Geographic. Birth of Afrobeat is his directorial debut.

“Familiar faces, unfamiliar places: A Global African Diaspora” (31 min), is an enlightening documentary about the history of modern Africans around the world. The enslavement of millions of Africans led to the development of African Diasporan communities around the world. Their knowledge and skills helped build new societies and they created new cultures that enriched global civilization. Revealing this global presence, Sheila Walker’s documentary highlights commonalities linking African Diasporan communities in distant lands.

The final movie, “Keteke” (98 min), directed by Peter Sedufia, is a Ghanaian drama movie in which a couple are bent on delivering their first born child in Akete. The only reliable means of transport is by rail from the outskirts of the town. They missed out on the train, so in journeying miles to reach their destination, they make a wrong decision and find themselves in the middle of nowhere. Peter Sedufia is showing great promise as a movie director in Ghana. This movie has been screened at the Cape Town Film and Market Festival 2018 and won a prize at the Khouribja African Film Festival in Morrocco.

The Tuscaloosa Africana Film Festival is presented by the Edward A. Ulzen Memorial Foundation (EAUMF) and Afram South Inc., two non-profit organizations supporting education and public health initiatives in Ghana, West Africa and West Alabama respectively. It is also co- sponsored by The College of Community Health Sciences (CCHS) at UA and Tuscaloosa Sister Cities Commission. Tuscaloosa is a sister city of Sunyani –Techiman in Ghana.

Meals are available for purchase from “Wings on Wheels” throughout the evening.